This bread is very easy to make and I’m pretty sure that it’s on the healthy side.  Oats and whole wheat flour–it’s got to be, right?  Either way, it’s quick to make and delicious.  I have found myself making it on a regular basis because I like to have it around.  I think it’s got a little bit of a sweet flavor to it and it’s great toasted for breakfast.  Hope you enjoy!

1. Sprinkle yeast onto the warm water and stir until it dissolves.  Stir in the honey and set aside (about 5-10 minutes).  It should start foaming.

3. Add the yeast mixture to your dry ingredients and mix well with a wooden spoon.

4. Place the dough into a greased loaf pan and set in front of a warm spot (I use my space heater) for 30 minutes as it rises.

From 101 Cookbooks.  Originally adapted from Gran’s Kitchen: Recipes from the Notebooks of Dulcie May Booker.

Time for a picture of the cat helping with the dishes?? 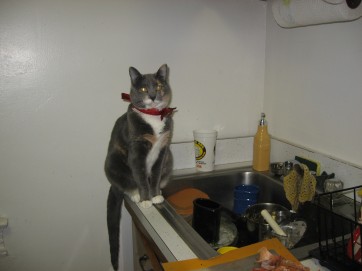 I saw this salad on a blog the other day and thought it looked like it had some interesting flavors.  I also made enough so that I could take it to lunch all week and I added some turkey sausage for a bit of protein.  I tend to get hungry so quickly at work (like a hungry caterpillar), so the more substantial lunch is, the better.  I heard from someone this weekend who has checked out my blog (thanks Andrew!), so I’m going to try to incorporate more pictures in each post.  I added a few below so that you can see the meal in progress.  It’s not the prettiest process, but it did taste good!

1. In two separate saute pans, heat up the olive oil.  For the onions, get the oil hot and add the balsamic vinegar, the onions and the salt and pepper.  Cook over medium heat, stirring frequently,  till the onions turn soft and lightly brown (about 20 minutes)

2. For the sausage, heat up the olive oil and add the sausage.  I usually remove it from the casing and break it up into smaller bits.  Cook all the way through, until it is lightly browned. 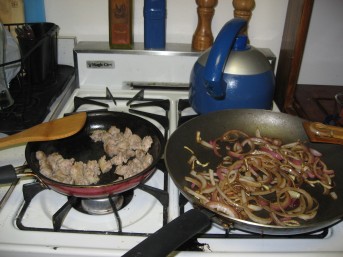 For the salad
One grapefruit,segmented
Washed spinach (or whatever salad greens you feel like!)

3. For the dressing, combine all ingredients except the olive oil.  Pour in the olive oil slowly until it tastes the way you like.  I probably added less than 1/4 a cup of olive oil.

4. Arrange the grapefruit pieces, sausage and onions over the spinach.  Pour dressing over it and combine.

5. Enjoy the extras for lunch if you want.  I kept the dressing, spinach, grapefruit and onion/sausage all separate until the night before. I wasn’t sure if if would get too soggy.  Enjoy!

Adapted from Apple a Day. Originally from a Giada recipe found on FoodNetwork.com

Over the past summer and fall, I was part of a local CSA.  Each week, we received a variety of veggies and fruits and herbs from a local farm.  For a few weeks, a large handful of dill was part of the share and I had to come up with ways to use it.  I found these scones on Annie’s blog and they ended up being a delicious way to use up some dill.  I froze half of what I made, and enjoyed one for breakfast this past week.  I froze the scones after I had baked them, but you could also freeze the dough as well.

4. Whisk together the eggs and heavy cream and quickly add them to the flour-and-butter mixture.  Combine until just blended.  In a separate bowl, combine the cheddar, dill, and 2 teaspoons flour and add them to the dough.  Mix until they are nearly incorporated.

5.  Put the dough on a floured counter and knead for about a minute, until all the cheddar and dill are spread out in the dough.  Using a rolling pin, roll the dough into a 8 inch square, about 3/4 of an inch thick.  Divide the dough into 4, 4-inch squares and then cut those in half to make 8 triangles.  These come out fairly large, so you could cut them again into smaller triangles.

6.  Put the scones onto a baking sheet lined with parchment paper or greased.  If desired, brush the tops with egg wash.  Bake at 400 degrees F for 20-25 minutes, until the tops are browned.

From Annie’s Eats.  Originally from The Barefoot Contessa Cookbook